Was reading an interview with the new CEO of Museums Victoria, Lynley Marshall, who talked about the sense of wonder and amazement that visitors can have at museums. Having witnessed this many times in my audience research career, I got to thinking about how museums could then design experiences that foster a sense of wonder and what that means for visitor learning outcomes.

While working in the US last year I came across this chapter, From Indifference to Activation: How Wonder Fosters Empathy In and Beyond Informal Science Centres (Ausman, et al, 2016), which contains some useful ideas about how informal science centres and museums can play a role in invoking wonder through hands-on, interpretive and social experiences, while also fostering critical thinking, empathy and activism. In their words:

“… wonder is an innate human response to the world, … an emotional state of mind … [uniting] us as thinking and feeling beings. At its core is curiosity, for without being curious, one cannot succumb to wonder. When people experience wonder, they respond emotionally. As wonder is an emotional response, and empathy relies upon sharing another’s emotions: these two are inextricably linked” (p.93).

The authors talk about wonder as being “… no longer merely an object at which to marvel; instead, it is an experience that motivates and inspires” (p.94). They report on research at the Carolina Raptor Centre and the Discovery Place that examined the impact of wonder using observations, focus groups with front-line staff and staff surveys, asking the question “When [staff] observed wonder occurring, what did it look like?” (p.96), and also what were visitors then “doing with that experience” (p.97, emphasis in original). Their conclusion was that “… igniting wonder is much like igniting a fire” (p.97) and they developed the Wonder Triangle, a very useful, and usable way, to think about how to incite wonder, as per the figure below. 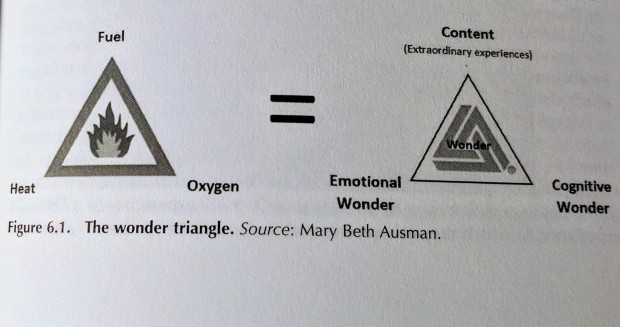 Another interesting idea was around the definition of wonder, with one of them being ‘to doubt’. Again, in the research they found that ‘doubtful’ visitors are more likely to experience wonder, as they need to establish a personal connection and move through doubt to curiosity to wonder to awe and become more likely to then share their experiences, leading to a potential activist mind-set.

Wonder and empathy (and activism)

There has been lots written lately about how museums need to be more empathetic and encourage action (see for example, Mike Muraswski, The Urgency of Empathy and Social Impact in Museums), and the authors have linked the idea of wonder with empathy (and then activism) in a way I had never really thought about before.

During their observations looking at wow moments, they found that these mostly occurred when another “… human was there to make or share that connection with them” (p.102). This led the authors to link wonder and empathy together: “… [the] connection between wonder and empathy is natural. When you experience a wonder moment and then share it with others (empathy), you are moving up the wonder scale to activation”. (p.106). Empathy takes wonder to a higher level as the sharing of experiences and reactions with another person can result in some response, followed by subsequent dialogue about the experience: “Taking the risk of sharing one’s wonder with another person is a vulnerable position, and yet it is a key element in the cycle of wondering and learning.” (p.106).

“… when our visitors feel they are empowered with the knowledge and wonder to question and debate the science issues that face our society and our world, their collective voices are louder and stronger. We hope that in those moments they will recall the wonder they experienced as learners at our informal science centres and channel that wonder into a positive impact on our collective future” (p.111).

And isn’t that a wonder-ful thing to aspire to!